A few weeks ago, we sent out a quick survey to ZBL teachers on our mailing list to check in and see what you liked and didn’t like about ZBL. We’re delighted to say that we heard overwhelmingly positive feedback, and are excited to take what we’ve learned to make it even better!  My goals for creating Zombie-Based Learning were to create a curriculum that:

Methodology: please note that the audience was provided closed-ended options, and asked to check all that applied–so answers won’t add up to 100%. Also, we provided a write-in box for open-ended answers. 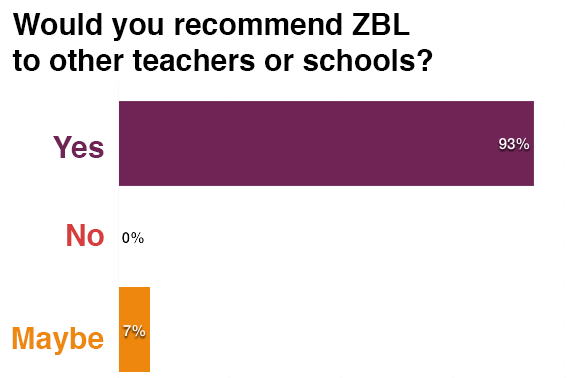 Measuring the “likes” I was gratified to see that teachers really did value having the important parts of curriculum including assessments, rubrics, and resources. Tied for the top favorite  was that the curriculum is Project-Based Learning in practice. As a big believer in Project-Based Learning (PBL), I’m happy to see so many teachers valued the opportunity to use it in the classroom. Many teachers approve the theory, but are unclear on how to deploy it.

Because I deliberately designed ZBL to be a good introduction to PBL,  I’m glad to see that there are quite a few teachers who are motivated to get more training in Project-Based Learning techniques.  It’s something we’ll be able to help with down the line!

As for the “dislikes” beyond PBL training, 14% of the responses said that ZBL didn’t fit into their current plans. Additional write-in comments included a range of reasons such as “no longer teaching the subject” to “district not dedicating a full semester for Geography”.  While I designed ZBL to fit into as many plans as possible, I was also pleased to hear that many teachers were able to modify it and fit it into their needs.

The feedback was also very valuable to confirm the items we are eager to improve upon. We’re working on plans to make the curriculum materials more interactive, easier to download,  and digitizing and updating materials to integrate with gradebooks and other valuable school tools. We also heard that a lot of students are clamoring for the next issue of Dead Reckon. We’re trying hard to get them out! We’re eager to share the continuing story as well, and are happy that students are enthused about it as we are.

We’re thrilled to see that teachers are finding a lot of value in ZBL and the resources accompanying it to support their teaching. Between this survey and the student work we are getting from some of the teachers, we’re continually improving to be a more useful curriculum for teachers and a better learning experience for students.  THANK YOU for your support and your voice!

If you did not get a chance to take the survey, feel free to respond here: http://zbl.im/4survey

I’m tired of people thinking of geography as memorizing locations and capitals. Geography is so much more. There are unlimited amazing questions that geographers take on to help us better understand how the earth affects us.

In an attempt to help people imagine these big questions, I created the Geography Question Generator. It randomly creates questions that a geographer could explore. Right now it can generate about a couple hundred questions, a few might make a little less sense (no artificial intelligence in this tool). I’ll keep adding elements to it to create more questions. They mostly stick to broad topics in geography.

My hope is that people will take a little bit of time to consider the exciting questions that geography can help us explore.

Check out the tool here.

This tool goes great with the first lesson in Zombie-Based Learning, but can be used at any point to show that geography is a pretty deep field. I have added a new online viewer for the first issue of Dead Reckon. This new reader is faster loading, higher quality, and I’ve given it a simple URL so that teachers may share it with students.

The full comic is behind a login.

Members can find the login and password on the Dead Reckon Downloads page. Share this login with your students to provide them access to the online viewer.

Here is the URL you can direct students to: www.bit.ly/readdead

You may also view a demo of the new online viewer here: Dead Reckon Demo

Feel free to provide any feedback. I made these changes based on feedback from some of the students who were reading the comic and having trouble reading it as a PDF or having to deal with slow loading. If you have any suggestions on how to make this reading experience easier for teachers and students, feel free to contact me: david@dthunter.com Check out the first 16 pages of Dead Reckon, the graphic novel that goes with Zombie-Based Learning.

Hello Everyone! A quick update just to let you know that ZBL is accepting Paypal donations again. To donate, Go Here.

The reason I’m accepting donations is because of 2 reasons:

1) I’ve been getting a lot of requests from people who missed the limited 25 day Kickstarter window and would like to get in line for materials and resources, or would like to just donate some money!

2) I have just started working with a great illustrator and colorist for the Zombie-Based Learning Graphic Novel! The original fundraising covers the first 32 pages of the graphic novel, but there are about 100 more pages to go. This graphic novel walks students through the zombie apocalypse narrative, introduces projects, teaches geographic concepts, and is an exciting story! I can’t wait to share more with you soon!

Share this page or the donation page! There are plenty of people out there who want to get involved!