Geography and Language – How do you pronounce “pecan?”

As someone who has tried to disassociate himself from where he grew up (due to complex factors), I like to think I have a pretty good control over my dialect. It was pretty easy to stop using “wicked” as an adjective. Just now you have most likely done some instant linguistic geography thinking and figured out the region I grew up with down to a radius of about 60 miles. Come fall and Thanksgiving, I just can’t bring myself to talk like most other people in the Pacific Northwest. I love pecan pie and I pronounce it “pee-KAN” pie. I’m often corrected or given a strange look(the same way I looked at people when I first went off to college and heard someone call a grocery bag a “sack”). Most people here say “pee-kon” pie.

So, how do you say “pecan” and how is that affected by your geographical history? In 2003, Harvard conducted some surveys on dialect in the US. They mapped out the responses based on where people lived during formative language development years. Check out the maps of the Pecan Survey here.

You can also see the survey applied to Google Maps here.

To view more maps of more dialectic surveys from Harvard, view the list of the 2003 survey results here.

Come back again as I’ll make a few more posts about Geography and Language this week.

The Geography of Horror

ESRI has put out this great “Geography of Horror” map, just in time for Halloween. It’s a map of where the top rated horror movies (about 250 of them) take place. You can explore the the locations via decades of movie releases.

This kind of thing brings up questions I wish I had time to explore. How do horror movies influence the perception of location? What geographic characteristics contribute well to horror? It would also be interesting to try and find remakes that have been done of movies and compare how the locations play a role in each story. For example, compare The Ring (2001) which takes place in Seattle, with the original Ring (1998) set in Japan.

The Geography of Horror.

I’m tired of people thinking of geography as memorizing locations and capitals. Geography is so much more. There are unlimited amazing questions that geographers take on to help us better understand how the earth affects us.

In an attempt to help people imagine these big questions, I created the Geography Question Generator. It randomly creates questions that a geographer could explore. Right now it can generate about a couple hundred questions, a few might make a little less sense (no artificial intelligence in this tool). I’ll keep adding elements to it to create more questions. They mostly stick to broad topics in geography.

My hope is that people will take a little bit of time to consider the exciting questions that geography can help us explore.

Check out the tool here.

This tool goes great with the first lesson in Zombie-Based Learning, but can be used at any point to show that geography is a pretty deep field. I might have to say that the one combination I probably love more than geography and zombies is geography and pizza. I have a tattoo about pizza that is too embarrassing to share on the internet.

The blog post also gets into some thoughts on regions and migration of ideas when making suggestions about why the pizza places are as popular in different areas as they are:

Regionally, Papa John’s, which started in Kentucky, is strong in the east central area; Godfather’s, with headquarters in Nebraska, is popular in the midwest; Little Caesars shows strong in California and Michigan (its first location in Garden City, Michigan); and Papa Murphy’s is strong in the northwest, which makes sense because it started in Washington. 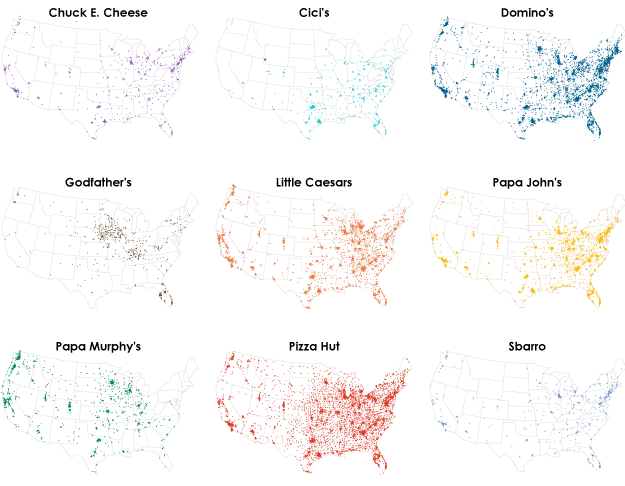 A few years ago, Floating Sheep created what they call the “Great American ‘Pizza’ Map.” It’s a very interesting map that plots out internet user references to pizza, guns, and adult clubs. In the comments there are the start of some great geographic discussions and questions around culture and location, but since it refers to adult clubs, I’ll let you decide if you want to draw from that resource. Maybe for the much older kids. However, the Pizza Place Geography maps at Flowing Data is a great resource to give to students. Just know that it will make them hungry.

Ordnance Survey took their actual topographical data  as well as image data, but instead of  putting them  into a GIS program, they scaled it down and put it into Minecraft. They used different block materials to display different features (for example, the gold blocks are minor roads).

Minecraft players can even download the map and explore it. However, it’s a massive file.

I think this is exciting. I love the idea of combining real-world data and games. Could this be a way to get students interested  in GIS? Essentially, Minecraft has been turned  into a very basic GIS program.

Follow the link to find out more about how they did it. Use the article as an engaging reading extension for students interested in Minecraft and/or GIS..

Here is also a nice video from Ordnance Survey that explains GIS: If you’re teaching, learning, or working on a project that requires you to find resources on population density, make sure you check out the Global Rural-Urban Mapping Project (GRUMP) hosted at Columbia University. They compile data from NASA nighttime photos from space to create maps of where people are located (the same method used in ZBL Project 01 and Dead Reckon).

Take a look at the site and browse some of the awesome maps they have. If you are doing any research of a country, these maps will be valuable to you. You can even register to download specific data.